You may have heard that Lego is working to increase its market among girls. This caught the periphery of my attention back in 2012 when there was a bit of a flap about Lego’s tactic of producing pink and purple blocks for the female market.

Then, the Twitter stream went abuzz last month when Lego added a female scientist to its mini-figure collection. This wonderful editorial by Maia Weinstock in Scientific American moved Lego’s recent marketing efforts from the background to front-and-center of my awareness: “Breaking Brick Stereotypes: Lego Unveils a Female Scientist” (9/02/13).

As I read, with interest, about “Professor C. Bodin,” our new woman-in-STEM mini-figure, my eyes drifted to Weinstock’s photo mashup of Lego female torsos*: 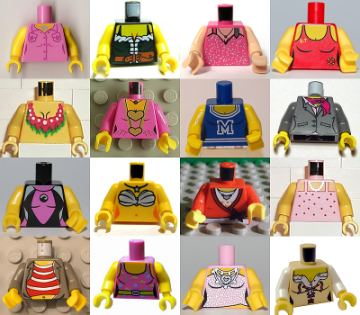 Mattel introduced the highly successful venture of Barbie, with her 36″ bust and 18″ waist, in 1959 (see “Pretty Plastic Barbie: Forever What We Make Her.” NPR, 3/09/08). Fifty-four years later, we have Legos with décolletage. I guess Lego would tell us that, like Barbie, this sells.

What is Lego thinking!? That to sell toys to girls, it is necessary to portray their gender in a sexualized motif? And we’re buying this stuff? Yikes.

For more enlightening data and opinion on this topic, see:

*Just for the record: In correspondence, Weinstock told me that, after creating the image above, she learned that one of the torsos is actually a male pirate. You probably can guess which one.

Where in the World?

Give me your reactions! I welcome your feedback in the comments section or, if you prefer, email me at claudia.daggett@gmail.com.
%d bloggers like this: